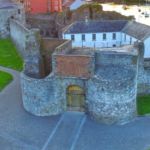 Dungarvan castle (also known as King John’s Norman Castle) was founded in 1185 by Prince John. This castle was built in an Anglo – Norman style and is one of many castles built around the 12th century in the South-East of Ireland. The earliest part of the castle is its shell keep, which is rare for Irish castles to have as this is more commonly found in English castles.

During the Irish civil war the castle was repurposed as a barracks, within the castle there is a military barracks consisting of two stories which were built sometime during the 18th century. The castle fell into disrepair when it was taken by the Irish Republican Army who set it on fire when leaving in 1922.

The castle was later restored following the foundation of the Garda Síochána and was the local Garda station up until 1987. For many years the castle again lay in disrepair but thanks to Dúchas (Heritage service) it has been restored and is open to the public offering an audio-visual show, an exhibition and guided tours.