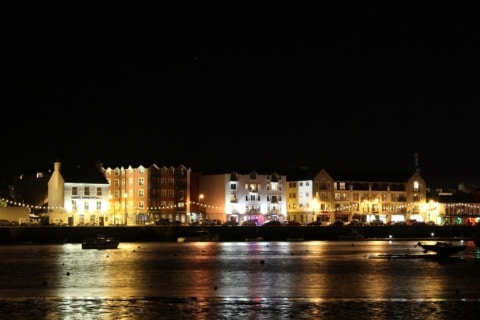 Dungarvan is a coastal town located in county Waterford, on the south east coast of Ireland. Its name in Irish, Dún Garbhán means ‘Garbhann’s Fort’, named after Saint Garbhann who founded a church here in the seventeenth century. The town is located on the N25 (European route E30), which connects Cork, Waterford, and Rosslare Europort.

The town is situated at the mouth of the Colligan River, with a bridge built by the Duke of Devonshire in 1801, crossing the river separating the parishes of Abbeyside and Dungarvan.

During the Cromwellian conquest of Ireland from 1649 to 1653, Dungarvan surrendered without a siege, unlike Waterford.

Dungarvan is also home to the Burgery Ambush which occurred in 1921, an incident in the Irish war of independence.

Along the harbour is King Johns Castle, commissioned in the twelfth or thirteenth century by King John of England.

Dungarvan is also the famous home places of many, and mentioned fondly in numerous pieces of literature.

The British poet Laurette, sir john Betjeman lived in Dungarvan from 1941 to 1943, and mentions Dungarvan in his poem ‘The Irish unionists’ farewell to Greta Hellstrom.’ Each stanza closes with the line “Dungarvan in the rain.”

“He was Irish, from Dungarvan. Having said this, he stopped short, as if he had revealed a secret.” This line was mentioned in the collection of short stories ‘Labyrinths’ by Jorge Luis Borges.

‘The story of Lucy Gault’, written in 2002 by William Trevor also gives the town a mention.

St. Marys street in the town was home to the poet Mai O’ Higgins.

The famous physicist and Nobel Laureate Ernest Thomas Sinton Walton was born in Abbeyside in 1903, near the church, overlooking the harbour. He’s most famous for his work with John Cockcroft on the splitting of the atom, and became the first person in history to artificially split the atom. A plaque is placed on the wall beside the door of his birthplace in Abbeyside. The local park, Walton’s park is named after him, and he attended the ceremony of the official opening in 1989, before his death in 1995.

A final fun fact is that the town of Dungarvan is twinned with Erie in Pensylvania, USA.