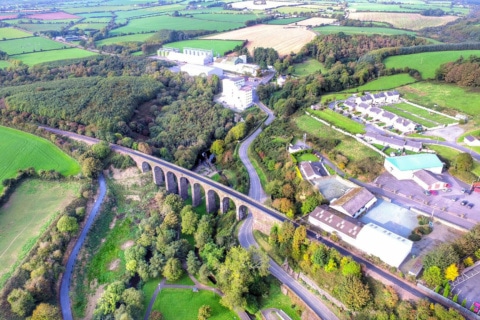 The Greenway is an old railway line that has been converted into an off road cycling trail, with the surface being predominately tarmacked and mostly flat. It runs from the historic port of Dungarvan, to the quays of Waterford city, founded by the Vikings over 1000 years ago in 914AD, making it Ireland’s oldest city. The length of the track is 46km from Dungarvan to Waterford!

The Greenway begins at Walton park in Abbeyside, named after the famous physicist Ernest Walton who, born a short stroll away, became the first person in history to artificially split the atom.

It then continues on in the direction of Clonea, where a short detour to the right can be taken if one feels like a dip in the Irish Sea.

Continuing along the Greenway, it opens out to show magnificent scenic views of the bay, before coming to the Ballyvoyle viaduct, constructed in 1878 before being blown up during the civil war in 192, being rebuilt in 1924.

Shortly after this is Ballyvoyle tunnel, built in 1878, which stretches almost half a kilometre. Watch out for the fairy houses lining the sides of the track before and after the tunnel! (9.5km mark)

Just after the tunnel you’ll reach Durrow, where you can call into O’ Mahonys pub/shop for a pint or an ice-cream, and take a much deserved rest. At this point you’ll have 10 kilometres cycled.

Durrow viaduct is next on the journey, built in 1878 over the River Tay.

Another detour can be taken at The Carrigarea junction (check name), go 2 kilometers west here, and travel back in time to the last ice age. Legend has it that a lie must not be told here for fear of the enormous rock splitting in two. The rock can be seen from Cloughlowrish bridge.

Next you’ll go through a short recently built underpass, to prevent the need to cross the main N25 road. It’s then full steam ahead towards Kilmacthomas, where you’ll cycle over another viaduct, this one opened in 1878, with eight arches, passing over road, millrace and river. If you look to your left here you’ll see Flahavans, where Flahavans porridge and flapjacks are made! To the right you’ll have a view of Kilmacthomas village, where you can stop for some refreshments in a number of establishments in the village.

You’ll soon pass over a bridge over the N25. (check name) The next landmark is The Waterford and Suir Valley railway, where a tourist train can be availed of.

You’ll then pass the ruins of the medieval riverside castle, Kilmeadan castle. This le Poer castle was captured and destroyed by Oliver Cromwell in 1650.

Passed by will be the foot of the mount Congreve estate, the house built in 1760 by the same architect who built both cathedrals in Waterford city. The estate is most famous for its gardens, considered to be one of the great gardens of the world. It boasts collections of Azaleas, Camelias and Rhododendron, as well as fabulous walled gardens. (http://www.mountcongreve.com/)

You’ll soon come to Killoteran, marked by car parking spaces. Here, while it can’t be accessed, but can be seen, is Woodstown Viking Site. Uncovered here in 2003 by archaeologists, is an 8th century Viking site, predating the city itself.

One of the final landmarks is the newly built WIT sports campus, at Carriganore.

Plenty of the River Suir will have been seen by now, so it’s interesting to know that it’s actually a special area for conservation, protecting species such as otter, lamprey, shad and salmon.

Finally, there’s a great view of the new River Suir road bridge, with a single pylon 112m high on the south side with a main span of 230m over the river. Total cable length used in making the bridge was 11900m and 2,829 tonnes of deck steel.

The Greenway officially finishes on the ancient quays of Waterford city.